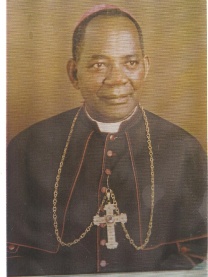 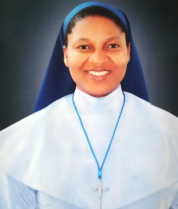 Registration for the internal area.

A BRIEF HISTORY OF THE DAUGHTERS OF DIVINE LOVE CONGREGATION

The Daughters of Divine Love Congregation came into existence during the agonizing and ravaging Nigeria-Biafra war. It was in a refugee condition at Ukpor in Anambra State of Nigeria that the Congregation was founded on July 16th, 1969 by a native born Nigerian Bishop, His Lordship, Godfrey Mary Paul Okoye, C.S.Sp., of happy memory. Bishop G M P Okoye was a man so full of love and so large hearted that he had a burning desire to spread this love of God which is manisfested in the Incarnation, Crucifition and death of Christ, and diffuse it to the four corners of the earth. His participation at the Second Vatican Council (1962-65) deepened the desire to found a new congregation whose major task would be to imbibe the spirit of the Second Vatican Council and preach the gospel of God's love to the ends of the earth in any manner they could do it hence, the non-restrictive nature of the apostolates of the Daughters of Divine Love. The founding of the Daughters of Divine Love congregation was not an instantaneous event. Bishop Okoye went through the due process of seeking the will of God through prayer; it was a long premeditated event which started during the Second Vatican Council and was realised during the civil war.

As a new formed community, they moved from Ukpor to Ihiala (both in Nnewi diocese of Anambra State) and later to Isienu (in Nsukka diocese in Enugu State). The Novitiate formation of the Foundation members was given by a Nigerian Formator; Mother Mary Charles Anyanwu. The First Religious Profession of the congregation on 4th November 1973 was a memorable day for all the witnesses when 16 young girls dedicated their lives to God in the congregation of the Daughters of Divine Love. In 1975, they were forced to move out of the borrowed accommodation used as Motherhouse at Isienu to a sisters' staff quarters at the Holy Rosary Teachers' College in Enugu. In 1979, a tornado struck the Aspirants' building at Abakpa Nike, Enugu and in sympathy, the then Anambra State government donated two duplex apartment buildings in Trans Ekulu, Enugu to the congregation. With some adjustments, the Motherhouse was moved to these duplex buildings in 1980.

Today it has grown to become an International Congregation of Women Religious of Pontifical Rights. The Members take the public Vows of Chastity, Poverty and Obedience otherwise known as the Evangelical Counsels and they dedicate themselves to contemplation and active apostolic work. Members of this congregation are fondly called and known as: The Daughters or The DDLs.

Their Founder Bishop Okoye of Enugu Diocese unexpectedly died on 17th March 1977, when the congregation was just eight years old and the Foundation members scarcely four years from the date of their first profession in November 1973. Their existence and survival was very much in doubt and many people suggested that they be disbanded and sent home. But thanks to the great Amazons, the Foundation and the co-Foundation members who rallied round Mother Maria Ifechukwu Udorah and encouraged her to be their leader; and with the stalwart support of Bishop Michael Eneje who succeeded Bishop Okoye. From nowhere, concerned Catholics formed themselves into the Association of the Friends of the Daughters. The leader of the group was Dr. Mrs. Winifred Kaine. They saw to the survival of the threatened emerging young congregation by providing material items for their needs. These people were truly friends in need and beyond doubts, instruments God used to sustain the Daughters at the time. In spite of the overwhelming storm of the time, the Daughters, clutching on the oars of the God of love and Divine Providence, were able to surf the crest of the storm and their survival is one of the greatest miracles of God's love. Daughters showed that they were great women of faith. If the Foundation and the co-Foundation members were not women of such great faith with childlike trust on the divine loving providence from the onset, but listened to those who insisted they must disband and go home, there would not have been anything like the Daughters of Divine Love Congregation in the Church anywhere today; and what a great loss that would have been.

Members witness to God's love in many dioceses in Nigeria and God has borne them on his wings of love to other countries outside Nigeria: Gabon, Cameroon, T'Chad, Mali, Kenya, England, Germany, Italy, the United States of America, Cuba, Jamaica and Haiti. The Congregation is blessed with 10 Regions comprising of : Enugu Region, Onitsha Region, Iselle-Uku Region,  Nsukka Region, Abuja Region, Owerri Region, English Region, German Region, Italian Region and American Region.The Lord had generously blessed the congregation with a teeming vocation and for this, they are thankful to God for the 900 and more wonderful Daughters; out of which many indigenous Daughters are missioned outside the shores of Nigeria.